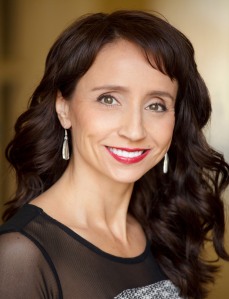 Lena Bjorna is originally from Norway. She moved to Los Angeles in the summer of 1995 to pursue an acting career and graduated from a Southern California University with a B.A. in Theater in 2000. But after several years of going through the school of hard knocks in Hollywood, she knew God was calling her to walk away from her childhood dream of fame and fortune in the movies.

“My career had become an idol to me”, she explains.”It had become more important to me than my walk with Jesus. God made it very clear that He didn’t want me to continue down that same path. I had to give it up so He could take His rightful place in my life.”

Always having been an entrepreneur at heart, Lena then made the transition to marketing. She went on to build a highly successful online business selling info products and coaching services, working with one of the biggest direct sales companies in North America.

As a top income earner with this company, she spoke on stage at live conferences, won multiple marketing awards, trained thousands of consultants around the world via the Internet, and was published in Lifestyle Entrepreneur Magazine. She was also featured as an expert guest on ABC Television’s “The Ripple Effect”, where she was interviewed on how to build a successful online business.

She bought her dream home, vacationed at exotic destinations, and was living the life she’d always dreamed of. She was wealthy, admired, and respected. She’d made it… Or so she thought.

Only a few years later, Lena found herself in the deepest, darkest valley of her life. In the spring of 2013, after having watched her multiple six-figure business suddenly come crashing down, and headed for divorce, she stood atop a castle in Northern Italy, contemplating how easy it would be to throw herself off. Lena explains: “Not that I was going to do it, but just the fact that I was entertaining the thought frightened me. I’d never had thoughts like that before. I was at a point where I was questioning everything in my life, even my very reason for existing.

In my search for worldly success I had drifted so far away from God. I hadn’t been seeking His will for my life or made my relationship with Him a priority for so long. I was overworked and out of balance. Of course I didn’t see it at the time, but the same thing had happened as when I was trying to break through as an actress: Marketing had become an idol in my life. It was in my business rather than in God that I was seeking fulfillment.

She had traveled to Europe that spring to spend some time with family and friends, but as she herself admits, “It really was just an attempt to escape. I couldn’t deal with things anymore and I was trying to run away from my problems. Of course it didn’t work. While I was in Europe, things only went from bad to worse.”

That April afternoon, all alone atop the castle, where she had gone to pray and reflect, Lena was eventually able to find comfort in the Word of God. She pulled her pocket Bible out of her purse and started to read in the Psalms.

“I wish I could say that everything changed there and then,” Lena says. “However, as the wayward child of God I was at the time, I continued to wrestle with the Lord for the full 90 days I spent overseas, sinking deeper and deeper into the world of pain and darkness I had created for myself. I didn’t know where I belonged anymore or what my purpose was. Eventually, by the grace of God, I was able to see what I needed to do, namely to go back to the United States, get plugged back into church, and seek God’s will and plan for my life.”

After returning to California in the summer of 2013, Lena began to rediscover her passion for God. “I was dealing with a lot of big decisions in my life at the time and was driven to my knees over and over,” she says. “During that time, 2nd Corinthians 12:10 became so incredibly real to me…’when I am weak, then I am strong.’ The strength and peace I continued to receive from God during that period was beyond anything this world could ever have offered me.

“Over the next several months God did a complete transformation of my heart. He changed all my priorities. Before long I found that my greatest joy and fulfillment came not from working my business but from going to church, praying, studying the Word, serving others, and listening to worship music – just as it did when I was a new Christian back in 1996. Simply put, I fell back in love with Jesus.”

Lena adds that she not only found emotional and spiritual healing in God’s presence but that she also started to see the world around her with new eyes. “I saw how much time I had wasted pursuing success the world’s way,” she explains.

Wealth and recognition suddenly lost their appeal to me. I just wanted to do what God would have me do, whatever that happened to be. All I wanted was to use my experiences, gifts and passions for His glory.

More and more as the months went by, Lena became convinced that God was calling her to talk to others about how to grow in their relationship with Him. Presenting on stage, training, and coaching had always come naturally to her, and it was something she had extensive experience with as a businesswoman. Just as importantly, it was something she was passionate about.

She had been wanting to pursue professional speaking for some time but had always thought it would be on the topic of marketing. Now that her desires had changed so dramatically, Lena realized that God had something different He wanted her to talk to others about: He wanted her to speak not about worldly, but spiritual, pursuits.

Lena points out that the process of discovering your calling starts with drawing close to God. As you do, God’s desires become your desires (Psalm 37:4), and instead of going after self-serving pursuits – something even Christians are prone to – you find that you adapt His vision for your life. She explains:

This is exactly what happened in my case. It was as if God’s plan started to unfold before my eyes. Everything suddenly made sense; the pieces started to come together. I even saw how I could use the pain I’d lived through to help others. I knew then that I had discovered my calling – His calling upon my life.

Today, Lena resides in North Hills, Southern California. Some of her favorite things are reading, stimulating conversations over gourmet coffee, and playing with her young nieces. She loves the outdoors and can often be found on road trips, hiking on nature trails, or watching the sunset from a local beach. Her church home is Calvary Chapel in Van Nuys, where she teaches Sunday School to preschoolers and is actively involved in a prayer ministry and in street evangelism.

A professional speaker, Lena presents at Christian women’s conferences, retreats, and other types of events around the country. She is currently in the process of writing a book on how to deepen your walk with the Lord.

Please go to Invite Lena To Speak to learn more about the various topics Lena is available to speak on.